This route is ideal when you want to acclimatize yourself slower, when you want to avoid technical sections, or simply when the access to the crater is closed, which typically happens during weekends and holidays.

The trail is relatively simple, the vertical gain being the hardest challenge. The trailhead begins at 3,700 meters. The first three kilometers we cross a beautiful forest, and at about 4,000 we came out onto a highland terrain.

Thirty minutes later we are climbing the Bear’s Ridge, on a relatively easy terrain (the rigde look sharper than it really is). Once we reach the rim of the crater, we enjoy a fabulous view. The crater is more than two kilometers wide, and it contains several lakes, on which waters the Nevado inners walls reflect.

We go on for thirty more minutes, about 800 additional meters, and reach the summit, known as the Friar’s Peak, at 4,690m.

The descent is done following the same route.

The Nevado de Toluca is only 127 meters lower than the mythical Mont Blanc.

The Nevado de Toluca o Xinantécatl is a 4,680 meter volcano in the State of Mexico, two hours away from Mexico City and less than one hour away from the city of Toluca.

It is a perfect place to get started in mountaineering, as both the degree of difficulty and the vertical gain are moderate, as long as you are properly acclimatized.

We pass the village of Raíces and reach the entrance of the park. We drive to a parking place named La Pluma (“The Feather”), where we gear up and start our trek. We are a bit higher than 4,000 meters.

After an easy 800-meter section, we reach the rim of the crater, where we enjoy an impressive view. The crater is more than two kilometers wide, and in its base there several lakes, such as the Lake of the Sun and the Lake of the Moon. The walls of the mountain reflect on the surface of both lakes.

The Nevado is rarely snowed, although there are a few days every year when the use of crampons and ice-ax is required.

We descend into the crater and walk two additional kilometers; the last 600 meters we go up scree slope to an altitude of 4,400 meters.

The next section requires at times some easy rock scrambling, always under category 4 in the French scale (5.6 Yosemite).

We follow the ridge for one kilometer, enjoying fabulous views, and we come to the summit, at 4,690 meters, called Pico del Fraile (Friar’s Peak).

The descent is usually done through a scree slope on the other side of the summit, although it is equally possible to retrace the ascent route. Either way, we come down to the crater, go around the Lake of the Sun, and reach “La Pluma”.

The Nevado de Toluca is only 127 meters lower than the mythical Mont Blanc.

Clothing
Others
0 Day
Normal Route
4 0 Mts
Altitude (15,387 ft)
0 Hrs
Total Time
0 Kms
Total Distance
"Our gratitude to our guide Pachi, who has pampered us with great food, protected us in the mountains, and taken the time to bring us closer to the Mexican culture. it doesn't get any better!" 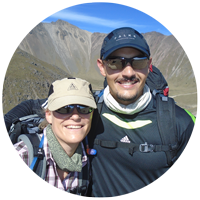 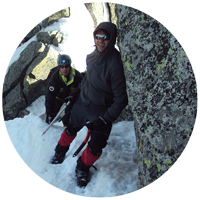